What Are Keepers Anyway? 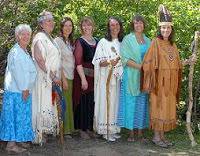 If you have been joining us on any of the tele-ceremonies and tele-meditations, you may have heard some of us referring to Keepers. Keeper is short for Keeper of the Sacred Path of the Feminine or Keeper of the Water Ceremonies.

In a Google search you would find that there are all kinds of keepers and water keepers from activists to ceremonialists, so I thought it would be wise to explain what we mean by being a Keeper here at New Dream.

The Sacred Path of the Feminine came to us a little at a time from four sweet and powerful Grandmother spirits on the other side of the veil. Initially, they introduced me to the ancient ceremonies that had been done around the ancient medicine bowl I had received. As I received the ceremonies I was invited to share them with women I knew.

The bowl, which is in the shape of a womb, was filled with water at every full moon, and together we women explored the mysteries of the Sacred Feminine that awaited us, in ancient ceremonies created by women for women. We opened to what it meant to shed our limited bodies to become our limitless selves through our own feminine natures, with our natural female inclinations.

Because the ceremonies were born again through me in this lifetime, I am called the Guardian, as we were called in the old days, where one woman held space for the women in her community through these ceremonies. Guardian implies that it is my job to remember, or guard, what has been learned so that it can be passed on to the next generation. Since we now had several women offering the ceremonies, we named them Keepers—keepers of the traditional practice and its gifts.

Over the years, more has been revealed, and we have come to realize the significance of the ceremonies, journeys and meditations the Grandmothers were passing on to us. Initially we referred to the Water Ceremonies as the focal point of our path, hence, Keepers were called Keepers of the Water Ceremonies.

But in time we understood that there was much more than the ceremonies. That was when we renamed our sacred work to be called the Path of the Sacred Feminine. While Keepers apprentice to offer the ceremonies, they also become Keepers of the path—experiencing and sharing the meditations and healing prescriptions (or journeys) that take us into deeper self-awareness.

The first two Keepers received a little bit of coaching from me, and no formal training. It was challenging for them in the beginning, and the teacher in me understood that proper training for such a significant responsibility was appropriate. So I created our apprenticeship program. I noticed that the details about how to do the ceremony were learned fairly; however, learning how to hold space (which is at the heart of the Sacred Feminine) was another matter.

Learning how to be the space you are intending to hold is a dedication to self-awareness and self-mastery. Most of us haven’t been taught to do that for ourselves, let alone for a group, and you don’t learn that within a couple of coaching sessions. So now, we offer a two-year program to help women prepare for this sacred privilege.

Women that feel called begin with pre-apprenticeship. The women notify us that they are interested in apprenticeship and begin attending the monthly Full Moon Ceremonies and Creation Meditations, because this is where the training begins—experiencing the gifts of the practice. They can do this with a local Keeper or with me on our tele-ceremonies and tele-meditations.

Then in the second year, women take the Secret Art of Ceremony class with Keeper, Cindy Mills, followed by monthly circles with Cindy, continued attendance at Full Moon Ceremony and Creation Meditation, and they prepare for their initiation as a Keeper, officiated by me at SpiritQuest. (For women outside the US other arrangements are made if attendance at SpiritQuest is not possible.)

The newly initiated Keepers are then invited to the Keepers Circle. We meet monthly over the phone to continue our exploration of personal development and service to men and women drawn to the Sacred Feminine. And we meet for a special day of training at our annual Women’s Retreat in the fall.

The two years of preparation give a potential new Keeper time to be sure that this path truly resonates and can be incorporated into one’s personal spiritual practice. This August, it is our time to begin preparing women to become Keepers. This is the appropriate time to let us know if:

How do you know if you are being called? It’s like a quiet whisper in the back of your mind that just doesn’t go away. It’s subtle, but it is insistent. If you think you might be called, please visit the web-page above and then e-mail us. We are ready to welcome you.