The Challenge of Creating Peace 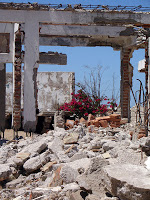 My husband and I just left Budapest, a city of people, and land, that were deeply impacted by World War II. Now we are in Caen, France, a city in Normandy that is very close to where the Americans landed to turn the tide of World War II, bringing the war in Europe to its end.

We wondered how much Caen was affected by the war, so we talked to the hotel manager about it. Our hotel looks over a lovely little town square of green grass, trees and summer flowers. David, the manager, pulled out a picture for us to see of the town square in 1944. It was a pile of rubble due to bombing.

In fact, the hotel we are staying in was bombed, and rebuilt years later. Because we were asking questions, David pulled out a large ariel photo of the farm lands outside of Caen from 1944. There were huge pock marks all over, where bombs had landed.

He told us farmers were unable to till their own land for a long time because there were undetonated bombs in the ground. Two out of every 10 bombs did not explode on impact. In fact, they had to check for and remove bombs in order to rebuild their city.

Tomorrow we will visit the memorial museum and the beaches where our troops landed seventy-seven years ago.

Other than some scorched sides of old churches, it is difficult to tell that a vicious war was fought on this soil. Today, cafes and brasseries fill the air with tempting scents, the streets are filled with shoppers from all over the world, and people are generally cheerful.

We understand that most visitors to this area are French, Scandanavian, English or American. I asked if many visitors were German, and our proprietor told us that very few Germans come to this area of France.

I can’t help but wonder if in another generation, when the war is further behind us all, that the scars will be fully healed, and such events will be distant memories.

Perhaps, soon, we will all remember that we are brothers and sisters from the same Divine light and the same primordial womb, and we will wonder how we could ever intentionally hurt another.

Peace occurs from the inside out, does it not? And it is not enough to have peaceful feelings and thoughts now and then is it?

Peace becomes a state of existence when we make it our priority, especially when we feel challenged and stressed. But most of us are not very well practiced in knowing how to make a stressful situation a peaceful one.

Inner peace is a skill that is learned. It is learned when we attend to our negative emotions with some means for shifting them. Will power is not enough. We need the skill, and the skill needs to be developed and practiced.

That is exactly what we will be doing at the Women’s Retreat in October. We will be learning how a woman finds inner peace—at any moment of any day—and especially in the face of her greatest fears, anxiety, and challenges.

Imagine a world where compassion is the response to national tensions. Envision with me the possibility that when your country’s leaders are thinking about going to war with another country, before any bomb is dropped, the leaders bring their concerns to a council of people that quietly meditate and hold the leaders of both nations in love and compassion.

Can you envision the possibility that held in the arms of tremendous compassion, leaders might never opt to go to war?

Now, can you imagine that such potential lives inside of you?

It does. It lives inside all of us.

This kind of compassion is the power of the Sacred Feminine—the womb of unconditional love from which all life was born.

Bringing such compassion to our planet, begins in learning how to do it for ourselves and those that challenge our inner peace. Then perhaps, war will become the most distant of human memories.