Mastery in the Sacred Feminine 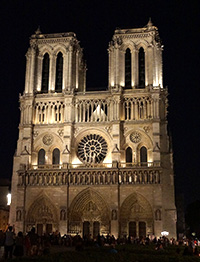 Jeffrey and I spent today at the Louvre, and in the presence of so much masterful art, it is easy to feel humbled very quickly. In an age when we expect things to happen quickly, one can forget that true mastery comes with great dedication and long-term commitment.

Yesterday, we stood outside Notre Dame (meaning Our Lady), marveling at the architecture and sculptures that took 90 years to complete (1163-1250), and it is still standing in its glory in 2012, some 762 years later.

In our world of how quickly can we get it done and out the door, we can lose the gifts of mastery and legacy that our ancestors understood.

y of the Venus de Milo (believed to be a sculpture of Aphrodite, as Venus was called by the Greeks), sculpted by Melos during the Hellenistic period, 320’s BC – 140’s BC. This is one of the great works of art we viewed today at the Louvre.

Imagine creating a legacy, such as this, whose beauty has been witnessed by over 8 million people per year, over 2,000 years after it was created?

That is our opportunity right now as we awaken the world through our consciousness in the Sacred Feminine. The beautiful ceremonial bowl given to me for the continuation of ancient water ceremonies in the feminine is estimated to be over 1,000 years old.

The practices of the Creation Meditation, journey songs and ceremonies were perfected over time, as generation after generation of women and the pathway’s guardian gradually created their completed pathway for shedding the limited body to become the limitless self.

They were willing to reincarnate within the tribe, dedicating themselves for over 1,000 years, in order to create a pathway for women that would allow all of us to immerse into the womb of our own beings, and the primordial womb of all life, in order to re-emerge reborn and renewed as the women of our own choosing.

In October, I will be bringing this beautiful medicine bowl to Sedona, Arizona so that you can experience its life-force and the gifts of a Sacred Feminine pathway for women that has been created as a gift and legacy for all women. http://www.newdreamfoundation.com/sacred-feminine-women-retreat.htm

This pathway teaches women how to reconnect to that limitless primordial womb from which we came and all life emerged. Once experienced, you may incorporate as much or as little from the tradition as feels appropriate for your own life.

And if you choose, it can become a doorway into your own mastery in the Sacred Feminine.