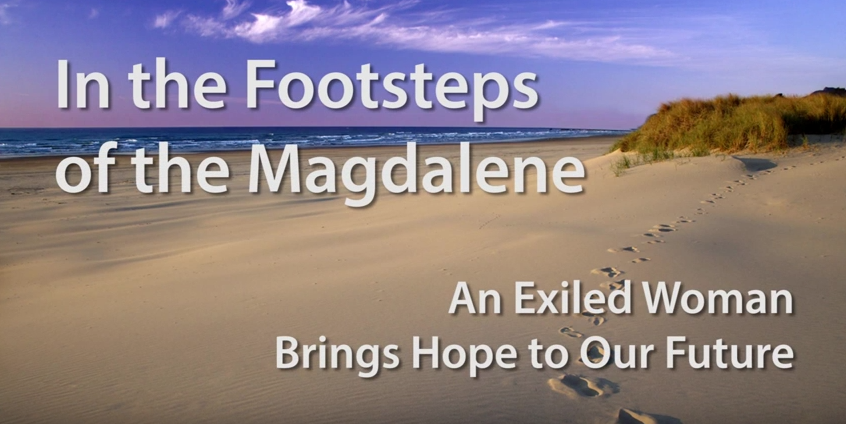 I was meditating one morning when it became very clear to me that I needed to visit France. At the time I didn’t fully understand why I was so compelled to go to France. I knew I wanted to honor the coming year in a meaningful way. I was approaching my 56 birthday, was born in ’56 and my mother died when she was 56. Somehow it just seemed like a significant moment in my life and for reasons, yet to be revealed, France was calling to me.

I immediately went to my husband and told him I had a sense that I needed to get to France for about 3 months and I hoped he would go with me. He responded in a way that is indicative of his trust in Divinely inspired insights. He didn’t flinch. He did not say, “How on earth are we going to pay for that?” He simply said, “Okay. We’ll go.”

A few months later, with four home exchanges arranged, a pair of round-trip tickets purchased on credit card points (we had just earned enough points the month we bought the tickets), and some money raised through crowd sourcing by New Dream Foundation (the non-profit behind Sacred Feminine Awakening), we were headed to France. 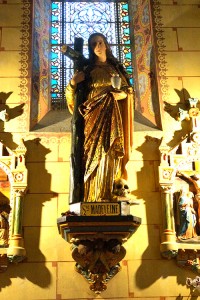 I was drawn to the southern region of France where Mary Magdalene is known to have lived and taught. Because of my profound calling to spend time in the same areas Mary Magdalene had lived, one of the board members suggested that I call my pilgrimage In the Footsteps of the Magdalene.

As we traveled through France, my husband and I visited sites where Mary Magdalene is honored, and the locations where she is said to have lived and was laid to rest. We included in our travels several churches that are homes to Black Madonnas, which added an unexpected, profound dimension to my inner journey. Keeping my promise to the Foundation and to the people I love, throughout our sojourn I made videos about the deep insights I was experiencing.

People came from around the world to visit the places Mary Magdalene lived, taught, and was honored by the people of France

I felt like a child being called home, and throughout our visit, my husband and I met many people who felt much the same way. We shared numerous exchanges and visits over meals with people who had visions or dreams, much as I had experienced, calling them to come to Southern France. People have been coming and continue to come from all over the world to spend time or even to live in the Southern region of France. It seems to me that Mary Magdalene has been and continues to be calling her children to her. 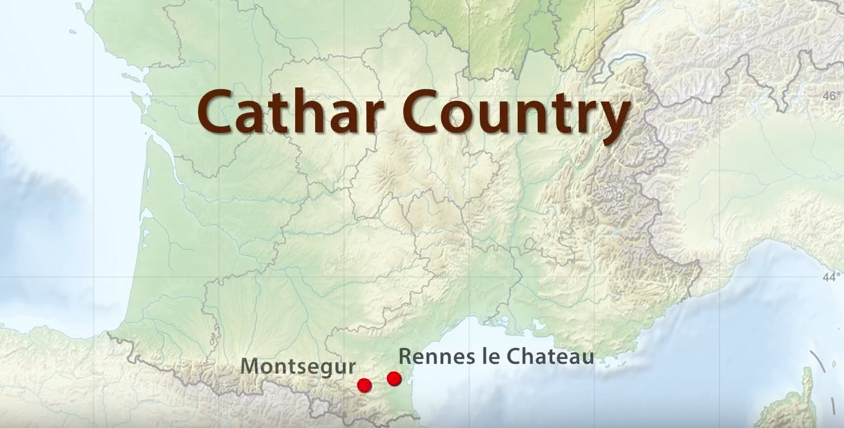 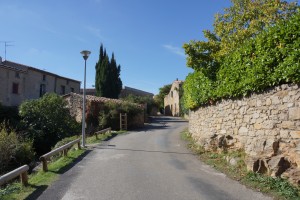 The road to Rennes-le-Chateau

While I am not an historian, the history of Rennes-le-Chateau and Montsegur are significant to the region, and have, what appear to be, profound connections to Mary Magdalene. I offer a very brief insight into these two powerful places and their inhabitants, and then share two videos, shot in the region, with my impressions as I entered these sacred grounds. 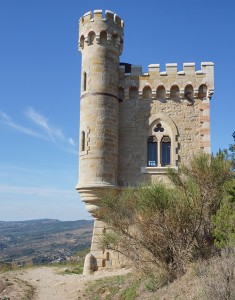 One of the areas in France that has become very popular since the publication of the book, Holy Blood, Holy Grail, is the hillside village of Rennes-le-Chateau. Here in the late 1800’s the village’s impoverished Abbe Berenger Saunier suddenly became the equivalent of a millionaire in today’s dollars.

He rebuilt the parish church, along with an unusual tower overlooking the landscape, dedicating them both to Mary Magdalene. How he came to possess so much money, no one really knows. Though there are bits of historical records, it is mostly speculation about the sudden wealth at Rennes-le-Chateau, Abbe Berenger’s secret, and his devotion to Mary Magdalene.

Also in Southern France, Montesgur is a unique stronghold on a very high hill. During the 1200’s, the rebuilt castle of Montesegur became a center for Cathar activities. Eventually, the castle became a refuge for Cathars when when the Catholic Church declared them as heretics. The castle came under siege as the inquisition attempted to rid Southern France of anyone that was not loyal to the dictates of the church. After a final 9 month siege, the Cathars surrendered and those who refused to renounce their faith were burned. 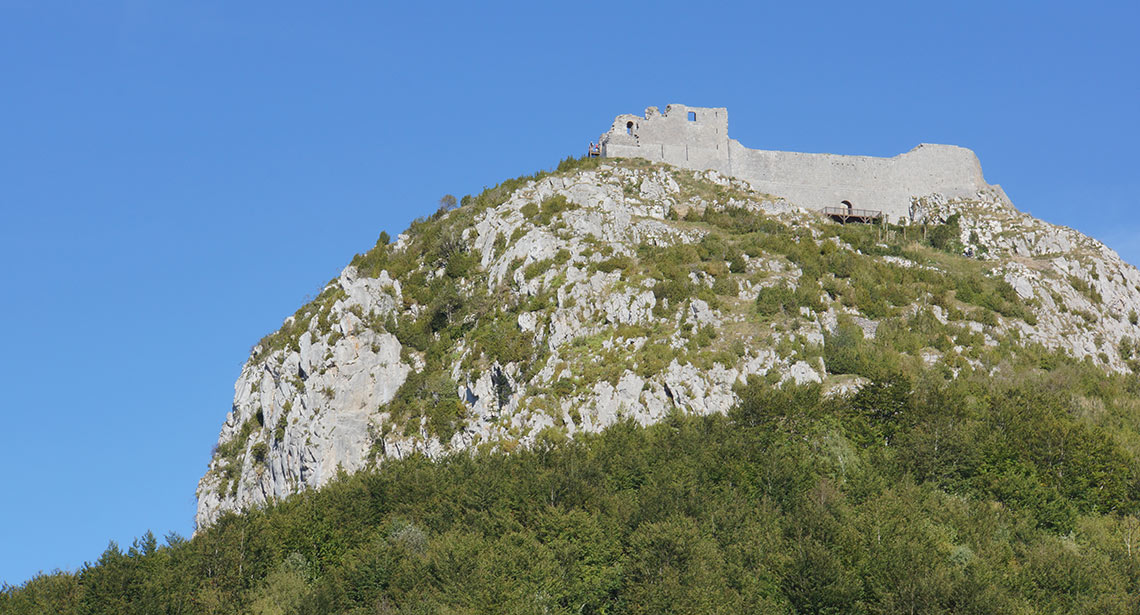 Cathars were known to be peaceful people, who believed in two gods—one that was good (of light and the heavens) and one that was evil (of materialism and the earth. The Cathars stated that they were of apostolic ancestry and lived as followers in the footsteps of Christ. They believed that souls, even the souls of angels, were trapped here on earth in human bodies. They were Gnostics, believing that divine revelation comes to the “inner elite”  who had trained and prepared to receive such revelations.

They lived in a far more egalitarian way than their Catholic counterparts. It has been postulated that members of Jesus and Mary Magdalene’s were married and their descents were Cathars, which would certainly add another dimension to the potential heresy of the Cathars from the perspective of the Catholic church.

I did not go to France looking for proof that Jesus and Mary Magdalene had a family. Elements of that story had already been revealed to me through visions I will be sharing in a future article. Instead, I sought to understand what it was Mary Magdalene wanted me to learn.

What was revealed to me I share in a video-log beginning with these two videos. The videos  include photographs from Rennes-le-Chateau’s church and tower, as well as the Cathar fortress at Montsegur.

Each of these videos gives you an opportunity to go on the journey with me, exploring the same questions that came up for me as I visited sacred sites dedicated to her by those who loved her.

One of the great gifts of historical and sacred sites, lies in what they awaken inside us. If we want to evolve as a species we are wise to ask ourselves, “What would our ancestors have wanted us to understand as a result of the events that took place at this site?”

As we discover the important lessons about our human nature, our weaknesses, and our potential, we can form new responses to challenges similar to those faced by our ancestors. As we evolve into more peaceful and loving beings, we honor the lives of those who have gone before us. We can hope that Mary Magdalene, Abbe Berenger Saunier, and the Cathars might smile if they saw that we now understand what is truly important in our journey as humanity.