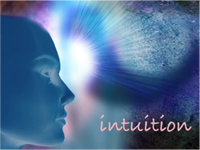 Intuition just may have a longer reach through time than we think it does. In a world where there are so many opportunities for things to do, it is easy to become overwhelmed by the options. It is equally easy to assume that as you get closer to an event or opportunity your insights about participating in it will be clearer then than it is now.

I’ve lived in several large cities with all kinds of spiritual events to attend. Early on, I would wait until the last possible moment to make my decision, as if my intuition just couldn’t switch on until about an hour before an event.

Then I had an opportunity to go to Egypt. Even though the trip was months out, I knew I wanted to be on that tour. So I committed, even before I had the money to do so, and with my intense commitment, the money arrived in plenty of time. I had lots of time to make plans with my friends, including making flight arrangements that allowed us to be on the same plane sitting next to each other.

That’s when I had some realizations about my intuition. Telling myself that I didn’t know and refusing to commit to attending certain events wasn’t about my intuition at all. It was about waiting to see if something better was going to come along.  With that realization, I discovered that if an event was truly going to support me in my spiritual development, it remained the right event for me to attend whether I made my plans a month in advance or one hour ahead. If it was right, it was right, regardless of any other enticing events that might pop up in between.

In fact, waiting until the last minute sometimes created problems for me because I didn’t plan enough. I didn’t account for traffic or sold-out events. I didn’t allow enough time to invite a friend to join me, so I would end up going alone, when I would have enjoyed some company.  I also discovered that I got in my own way by deciding at the last minute that I’d rather not go out. Later, I would hear from someone I knew about how fabulous the event turned out to be and I had missed the opportunity.

If I had chosen not to attend because I needed a different kind of nourishment that privacy at home afforded me, I would have been very comfortable with my decision. But if I chose not to attend because I was ignoring my spirit of adventure in order to watch a movie, I found I had some regrets.  It took me a while to realize intuition has a long reach. It can reach out for days, months, and even years. All I needed to do was check inwardly.

Now, I don’t wait. I sense into the event and I make a decision. I don’t have two or three events in waiting on my calendar. I create time to include my friends. I’m more inclined to get to events early, without stress. Because I trust the long reach of my intuition, I get to enjoy the adventure of it all.

If you want to develop your intuition and psychic powers, take a look at Discovering Your Psychic Awareness and Intuitive Wisdom—Gifts of the Sacred Feminine Home Study Audio Seminar.